In the US, gender stereotypes are slowly being broken down. Yet in Mongolia, some students have yet to learn the difference between “sex” and “gender”. “Sex” is the term used to define the sexual reproductive organs with which a person is born, while “gender” refers to either society’s view of the biological sex’s role or a person’s own perceived view of his/her sexuality. A couple weeks ago, I taught a class with my counterparts that had the students identify gender stereotypes present in Mongolia and ultimately tried to instill in them that these stereotypes are restrictive and do not mean that people who do not adhere to gender roles are any less of a person.

The class turned out to be more complicated than expected as some of my counterparts (CPs), after the first day of the lesson, told me that they think stereotypes are good because they show people how to act. In what ultimately became an educational discussion, various teachers and I discussed why gender stereotypes and stereotypes in general are restrictive. When discussing how many men in the US can cook and that some men are stay-at-home dads while the moms work, my CPs seemed skeptical that this would be possible in Mongolia. I informed them that I know of at least three couples where the husband cooks more frequently than the wife. In response to this, one of my CPs exclaimed, “wow, what a lucky woman”! I learned that although women may want changes, these changes are only present in Ulaanbaatar and, according to Mongolian woman, are largely nonexistent outside of the capital. 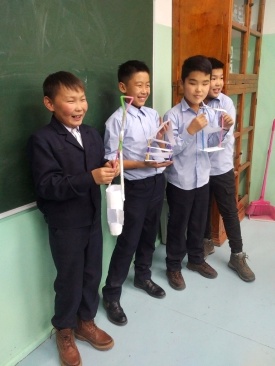 After this discussion, the classes were more on track with the goal of the lesson. I learned an outdated Mongolian idiom: “үсний урт оюун ухаан богино” meaning “women have long hair, but their intelligence is shorter than their hair”. This was a phrase that came up during each class as an example of gender stereotypes that Mongolian students would understand. Afterwards, each class was split into four groups: two male groups and two female groups. One group from each sex was assigned to discuss stereotypes or words regarding “act like a man”, while the remaining two groups discussed “act like a lady”. There were some phrases that came up frequently, such as: men have a higher position in society than women, women are the light of the family, women have long hair, men have short hair, women are more emotional, men are the support of the family, women can have a baby, men cannot have a baby, etc. It was interesting seeing how students’ responses got longer, more detailed, and generally more insightful each consecutive grade up. My favorite comments came from one of the 7th grade girl groups writing about men; they were quite the sassy bunch:

Overall, it seemed that the girls writing about men had respectful and mostly positive views, yet some boys writing about women had negative and almost contradictory views, saying that “women take problems more seriously than men, but their quality of work is lower” or that “women respect men” (but do men respect women?). Although most groups wrote that men rank higher in society than women do and have higher-up positions, one group of proud girls in 9th grade wrote that “women have a higher position than men in society. If a man can do it, so can a woman, so women should have higher positions in society”. In 9th grade, more comparisons were made: women are the engine of the car, men are the wheels. Check out all the students’ comments below!

At the end of the lesson, students were asked: “if a man is cleaning the house, does this make him less of a man?” (although the Mongolian translation came out to mean “if a man is cleaning the house, is this necessary work?”… apparently the phrase “less of a …” does not translate or have an equivalent in Mongolian). Out of all the classes in grades ranging from 6th to 9th grade, only one student responded with “necessary”. Surprisingly, the student was male. All the female students vehemently stated that it is not necessary for a man to clean the house. Now, I have a few hypotheses as to why the girls, for whom house work is an extra chore, said “not necessary” while the boy said “yes”. Adult women receive the brunt of the house work; this means that the girls, who complete household chores, are not yet overwhelmed. Perhaps this leads them to feel that completing the house chores is a sense of pride and the necessity of men cleaning the home would undermine the quality work they do. In addition, the sole boy who answered “necessary” was raised by a single mother after his father passed away, giving him a slightly different point of view on gender stereotypes in Mongolia.

By the end of the lesson, I could never be sure whether I had ultimately reinforced gender stereotypes or demonstrated that adhering to stereotypes can be detrimental. As a result, I always made sure to end the lesson by asking my Mongolian counterpart to say “all human beings, boy or girl, experience a range of emotions and desires not limited to their gender.  We learn stereotypical behaviors through how society thinks men and women should behave. Mongolians are diverse in many ways, and diversity is growing every day, creating the need for tolerance and empathy.” Hopefully, my students have at least been introduced to the ways in which gender stereotypes limit their potential.

Throughout my time in the Peace Corps, I have learned that the changes that arise are not monumental, but rather small changes in how people think that will eventually be passed down through generations. I’m hopeful that my students learned that they must not be confined to the limits of their gender.

One Reply to “My Exploration into Gender”